Next person to feature in our spotlight on members completing college courses this year is Barbara Seery.  She undertook 2.5 modules in her final year of a Higher Certificate in Visual Art Practice in NCAD:  Painting and Visual Research, Drawing and Sculpture and a 10 week module in Professional Practice.

Painting and Visual Research puts as much emphasis on research as it does on painting.   Researching, documenting and developing one’s chosen theme and also looking into the techniques and styles used by artists who might have painted similar themes.   Life drawing, blind drawing and study of composition, tone and colour also form part of the programme.  Barbara’s interest was taken by structures and her mid term assignment was a painting of the Sean O’Casey pedestrian bridge in Dublin, which appealed to her for its complicated form and interesting shapes.

Continuing her interest in structures, Barbara looked to the rural environment for inspiration for the end of term project.   Her local area provided plenty to work on: vernacular farm cottages now used for storage, Dutch hay sheds painted a faded oxide red, barn doors, iron gates held upright with baling twine and corrugated metal sheds.  The final brief was to produce a series of six small paintings on the chosen subject matter (four of which are shown below). 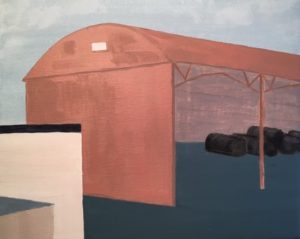 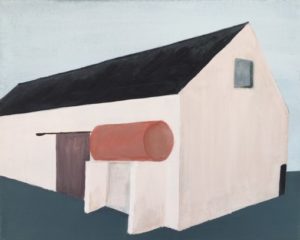 By concentrating on the simple forms of the structures and using a muted colour palette, she rendered these unremarkable buildings in a contemporary, rather than nostalgic, format.  The paintings are minimalist, with a flat, untextured finish on deep boxed canvases which support the contemporary expression. 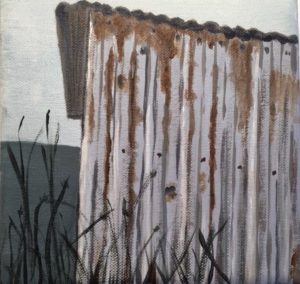 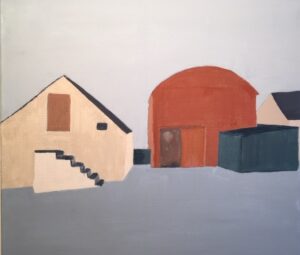 Drawing and Sculpture gives students a chance to work in 3D.   Barbara created three installations to draw attention to the numbers of migrants dying whilst trying to reach Europe or whilst awaiting processing of their refugee applications in Europe.  The statistics are shocking.

Barbara used teabags in various forms as a metaphor for the lack of welcome offered to migrants seeking a life in Europe.  Tea is a universal comfort, a symbol of welcome and hospitality for visitors.  Rituals of welcome involving tea have been used around the world for centuries.

Some drowned refugees have been found with pouches of soil from their home countries sewn into their clothing.    In “Memento” Barbara used tea bags dipped in plaster to represent the weight of that memento of home. The orange thread is reminiscent of the life jackets that didn’t save them. 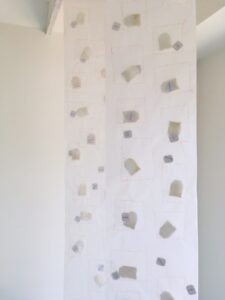 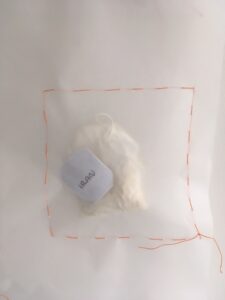 The names of the countries of origin were written on the ‘tag’ of each tea bag – a total of 50 teabags were sewn between 3 metre sheets of skizzen paper (like tracing paper) to form two hangings.

For the second installation, “There are many Ways …”, Barbara took the statistics for one year, 2018, and recorded the many ways in which migrants died by writing the cause of death onto unused teabags.  By dipping the ends of the open teabags into wax they could be held open to resemble Chinese lanterns of hope moving in the wind.   Again, orange thread was used to hang the teabags and plaster casts of hands were made and fixed to a wooden pedestal underneath. 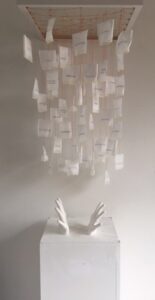 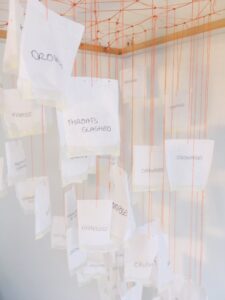 Barbara’s third installation comprised two scroll or banners using charcoal, ink, pastel and wax on rice paper.  Titled “Paths to Nowhere” no maps can prepare for the journey which ends in nowhere”.

The data used on country of origin and cause of death has been extracted from a list compiled by UNITED Against Refugee Deaths.eu, an NGO which has, since 1993, documented 36,570 deaths of migrants and refugees to Europe.  Barbara printed the list and displayed it with the installations so that viewers could see the full source material.  Unfortunately, the end of year exhibition did not take place in June but NCAD will be producing a digital catalogue in the autumn showcasing the work of graduates from its Continuing Education programme and its full time students.